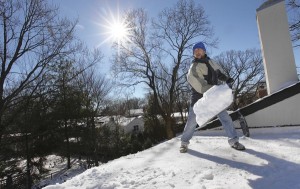 Erdinch Isuyfov removes snow from the roof of a home in Kenilworth on Friday. Experts say as little as 8 inches of snow atop a roof could create the kind of instability leading to costly repairs. (Chris Walker, Chicago Tribune / February 4, 2011)

A veteran suburban firefighter, Peter Vassios knows trouble when he sees it. So when he arrived home Wednesday morning to several feet of fresh snow blanketing his Flossmoor home, Vassios looked up at his flat-topped roof and didn’t like what he saw. “The snowdrift had left maybe 6 feet of snow in some areas,” said Vassios, 47. “I knew I had to get up there.” Mountains of snow piling up on streets and driveways may be the most frustrating aftereffect of any major winter storm, but experts say the hidden dangers are on the roof. It takes only about 8 inches of melting snow atop a roof to create the kind of instability that can threaten lives and ring up costly repair bills. Snow is believed to be the culprit in the partial roof collapse at a Kmart in Naperville on Thursday and may have been a factor, along with high winds, in the destruction of a Gothic-style church on Chicago’s West Side earlier in the week.

The damage to homes and small commercial businesses is often more subtle, said Cathy Barnard, general manager at Castino Painting and Home Services in Northbrook. Heat radiating up from inside a building melts the layers of snow that have settled on the roof. On pitched roofs, that water slides down shingles and can seep into the walls of a home. This occurs even on new roofs with no apparent cracks or leaks, Barnard said. On flat roofs, water puddles, then freezes, experts said. The weight puts pressure on the interior support of the roof and can trigger a collapse. “Anything over 8 inches is like a blanket that holds the warmth in your attic, so that the heat from your attic touches your roof, it starts to melt the snow,” said Barnard, whose 35-year-old, family-owned business added rooftop snow removal to its arsenal of home services just a couple of years ago. The bone-chilling cold that so often settles in after a major snowstorm compounds the snow melt because furnaces are working overtime to heat homes, Barnard said. “When it’s colder, you want to have this done right away because the longer you wait, the more ice will build up,” Barnard said. “We can’t remove the ice, we can only remove snow or else we risk damaging the roof.”

Work crews responding to a report of ice buildup on the roof of a two-story brownstone on Chicago’s North Side last week made an astonishing discovery, Barnard said. The homeowner had installed “heat tape” — a tape warmed by an electrical current — inside a gutter to keep ice from building up. Instead, the water puddled in the gutter in larger amounts and froze anyway, creating a huge chunk of ice that threatened to tear the gutter off the roof. “It was the size of a small car. I’m not kidding,” Barnard said. Though the process is fairly simple — typically accomplished with just a shovel, a snow rake or torch — professional snow-removal companies warn homeowners not to try to remove the snow themselves.

Professionals are more experienced at the slippery and often dangerous conditions of an iced-over roof, and they work in teams to secure ladders and braces when conditions are at their worst, said Martin Arteaga of Chicagoland Construction and Property Services. “I don’t think too many people are cognizant of their roofs and the dangers up there,” Arteaga said. “But I did check my own roof, because I know.” Chuck Jines, a former Chicago roofer, said the problems from snow damage have worsened over the years because so many recent homes have improperly built roofs. The vast majority of new roofs, flat or otherwise, are not sealed the right way, he said, creating small crevices allowing water to seep in. When it freezes, he said, it expands and breaks the seams. In the worst-case scenario, “the water pours into these people’s houses and they need to get it rebuilt,” Jines said. Vassios, a lifelong Chicago-area resident and an Orland Park firefighter, labored with a snowblower and a shovel for several hours Wednesday to remove the buildup from his roof. He said he wasn’t about to leave anything to chance. “Roofs can become unstable very quickly,” Vassios said. “And you don’t really know when it’s happening, so it’s best to try and prevent it.”